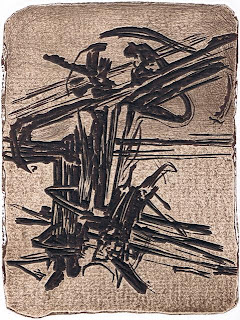 Gianni Bertini, born in 1922 in Pisa, is a painter of the abstract movement he joins in the late Fourties. His early pieces "I Gridi" (screams), provide a work around stamped letters. In 1950, Bertini focuses his work on the use of stains. The following year, with the exhibition of his work called "nuclear" art at the Numero Gallery of Florence, he takes part in one of the first demonstration of "Art Informel" in Italy. The Fifties are marked by his collaboration with the group "imaginary spaces" initiated by Pierre Restany, and numerous trips in major European cities he visits for personal exhibitions. He then goes to the U.S.A. and collaborates with the Gres Gallery in Chicago. In 1961, Sweden organizes a retrospective of his work to be resumed at the Palais des Beaux-Arts in Brussels. For the occasion, the art critic, René de Solier, writes a tribute to the artist whose he describes the work made of forms, signs and things as a "new hybrid":
"'The Gianni Bertini's adventure is obvious, and without concession, based on a golden rule, or job : not to be imprisoned in a formula. Do not only depend, and independence is there, on the only post-abstract painting . "

In the early Sixties, Bertini gets close to New Realism and, in 1965, he subscribes to the first Mec'art Manifest. In 1984, a retrospective is devoted to his work at the Centre National des Arts de Paris. In 1991, he produced a cycle of works on the Gulf War : "To remember" and in 1992 a new cycle on Antonin Artaud.