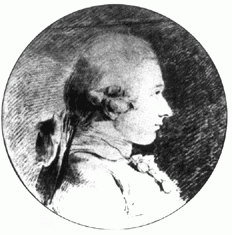 Dialogue Between a Priest and a Dying Man, dated 1782, is the oldest manuscript known of the Marquis de Sade (1740-1814). The "divine" Marquis makes a philosophical dialogue between a clergyman and a libertine. He strives to prove the nonexistence of God and exposes his militant atheism. The reason is ultimately the only guarantor of human morality :

"Reason, sir - yes, our reason alone should warn us that harm done our fellows can never bring happiness to us; and our heart, that contributing to their felicity is the greatest joy Nature has accorded us on earth; the entirety of human morals is contained in this one phrase: Render others as happy as one desires oneself to be, and never inflict more pain upon them than one would like to receive at their hands.

There you are, my friend, those are the only principles we should observe, and you need neither god nor religion to appreciate and subscribe to them, you need only have a good heart. But I feel my strength ebbing away; preacher, put away your prejudices, unbend, be a man, be human, without fear and without hope forget your gods and your religions too: they are none of them good for anything but to set man at odds with man, and the mere name of these horrors has caused greater loss of life on earth than all other wars and all other plagues combined. Renounce the idea of another world; there is none, but do not renounce the pleasure of being happy and of making for happiness in this. Nature offers you no other way of doubling your existence, of extending it. - My friend, lewd pleasures were ever dearer to me than anything else, I have idolized them all my life and my wish has been to end it in their bosom; my end draws near, six women lovelier than the light of day are waiting in the chamber adjoining, I have reserved them for this moment, partake of the feast with me, following my example embrace them instead of the vain sophistries of superstition, under their caresses strive for a little while to forget your hypocritical beliefs.

NOTE : The dying man rang, the women entered; and after he had been a little while in their arms the preacher became one whom Nature had corrupted, all because he had not succeeded in explaining what a corrupt nature is."
Currently, the librairie Loliée Offers :
Publié par librairie-loliee