Vrille : Taking a surrealistic pulse after the Second World War 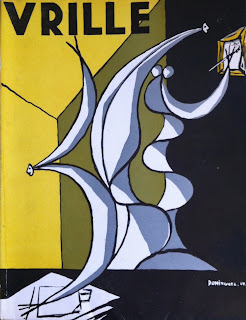 Surrealist magazine published at the end of World War II, Vrille is a only one number revue. As explained in the introduction "alibi", the purpose of this magazine, directed by Evrard de Rouvre (heir to a vast fortune built on the sugar industry, who became a film producer before being assassinated in 1979 by his valet), is to collect "texts, illustrations little-known from a public asleep by the grayish fog of a propaganda that clung to dimonstrate the emptiness of efforts of humans who, during the inter-two wars, tried to open art to wonderful horizons. But Vrille was especially attached to revive a tradition, over these four years of darkness, presenting texts as young witnesses of an overwhelming era, witnesses of the hope of whom who found in Surrealism the strength to contribute to the reconstruction of modern thought. "

One can find in the magazine, illustrated with many reproductions, the work of great figures of Surrealism including Oscar Dominguez who signed the illustrated cover. Among the texts, there is beautiful collection of Robert Desnos "Notes Calixto," in which the author discusses the literary influences in Surrealism, the importance of Mallarmé's work, gives us his thoughts on poetry :


Poetry gets landed with words and can not do otherwise. It also adopts sometimes (not poetry, fake poets of course) a cowardly attitude before the biggest questions : happiness, men future, the nature of being. Poetry is more often conciliation than resolution. Is it not possible to renew the links between poetry and science?