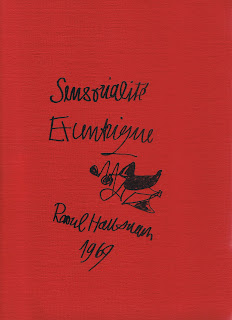 Founder of the Dada movement in Berlin, Raoul Hausmann (1886-1971), born in Vienna, is one of the first signatories of the Manifesto. His art, described as degenerate by the Nazis - he then left Germany to settle in France, is first experimental. Hausmann builds a poetry made up of sounds and onomatopoeia that he theorizes in the text "Optophonetics" (published in the journal "MA" in 1922). He has been the first to practice the art of collage, combining texts, fragments taken in the press, drawings and photographs. Based in Limoges in 1944, Hausmann will remain there till his last days .
Published in 1970 in a bilingual edition, Eccentric Sensoriality  is the last book written by Hausmann. It presents two major texts : the reprint of "Optophonetics" and therefore "Sensoriality eccentric" an essay in which the Dadaist has a pessimistic view of the modern civilization. He attacks the Homo sapiens who invented the capitalist dictatorship and limited knowledge to a purely materialistic level . Violent critique of progress, this utopic work hopes for the advent of a new man with an "eccentric sensoriality", a mental energy transcending the limits of the body and mind.
The book is illustrated by Jefim Golyscheff (1897-1970), Ukrainian painter and composer based in Berlin in 1909. Friend of Raoul Hausmann from the very beginning of Dada, he will take his distance from the movement in 1922 to get closer to the Bauhaus. Forced to flee the Nazi Germany, he moves to Spain and Brazil. He comes back in France in the 60's. 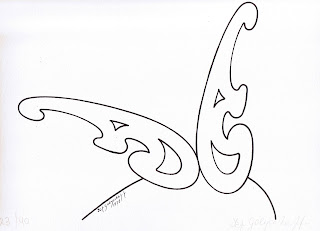