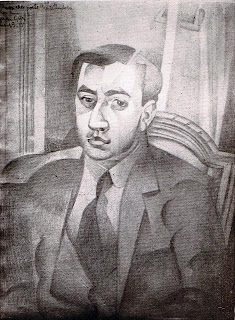 Vicente Huidobro (1893-1948), poet from the Chilean aristocracy, publishes his first texts in the early 1910s. In 1916, he moves to Europe with his wife and children and lives between Paris and Madrid. He associates with Surrealists and Spanish avant-garde. Rejecting the authority of André Breton, he begins to theorize the Creationism, a movement that promotes a poetry free of any reference, completely invented : "Create a poem by borrowing from life's patterns and turning them, giving them a new independent life (...) Nothing anecdotal or descriptive (...) Make a poem as nature makes a tree ". [in Manifestes, p. 49, editions of the La Revue Mondiale, 1925].
In Madrid, he influences the birth of the Ultraïsme, Spanish literary movement that intends to exceed the aesthetic standards of the time. Huidobro publishes other books, contributed to various journals (Nord-Sud, L'Esprit Nouveau, and the Spanish issues La Revista Cervantes, Ultra, etc.).. In 1925, he returns to Chile to edit a political newspaper, Acción, denouncing the fraudulent activities of famous politicians. Some thinks he can run for the Presidency. The poet escapes a bomb attack and flees the country. He continues his poetry work and his political activities,from France and Spain and returns, after some years, in Chile.
Never hesitating to judge his peers, Huidobro is often perceived as a man with an imposing ego. While it is true that his opinions are decided, sometimes bitter, full of an aristocratic confidence, Vicente Huidobro remains a figure of the time, regarded with Pablo Neruda - another personality with Breton he never stops criticizing - as one of the most important poets of Chile.