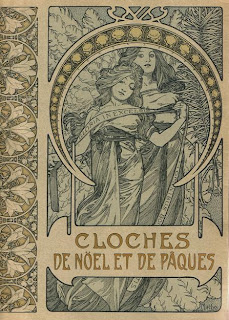 Slavic, Alfons Mucha (1860-1939) was formed in Vienna and Munich before settling in Paris where he made his name by making illustrations in magazines, newspapers and books. Sarah Bernhardt, seduced by his style, ensured the reputation of the artist from 1894 to 1900 : Mucha became the sole creator of her posters. With an important production (drawings, pastels, sculptures, objects, jewelry), Mucha established himself as one the masters of Art Nouveau. In 1900, he created a spectacular setting for the Universal Exhibition. He decorated the Bosnia and Herzegovina pavilion and got the silver medal. He went on with his illustrator activities and signed the poster advertisements for brands such as Moët et Chandon or Nestlé. Between 1912 and 1926, Mucha put his skills to serve a monumental project to the glory of the Slavic people. Believer and humanist, Mucha thought that art can participate in the uplifting of the soul. He raised money from wealthy American industrialists and got a particular support from Charles R. Crane who invested in The Slav Epic, composed of 20 scenes covering nearly 1,000 square feet of painted canvas. This gigantic work provides an important evidence about the rise of Nationalism in Europe. Settled in Czechoslovakia in 1910, Mucha took part in the birth of the Czechoslovak Republic in 1918. He drew the weapon of the new nation, stamps, banknotes. In 1939, the country is occupied by Germany and the Republic ends. Mucha, a Freemason, is interrogated by the Gestapo. He died shortly thereafter in July of that year. After the war, forgotten by the communists who do not appreciate this "bourgeois art" , Mucha's work is finally rediscovered in the 60s. 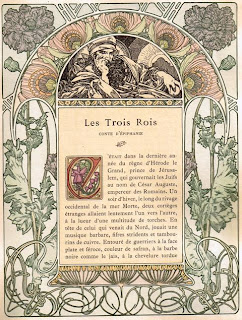 Published in 1900, Clôches de Noël et de Pâques (Bells of Christmas and Easter), collection of three tales by Emile Gebhart, is representative of the art of arabesque of Mucha who frames the text of many floral ornaments.
(sources : Wikipedia, Mucha museum)
Currently, the librairie Loliée offers :
Publié par librairie-loliee