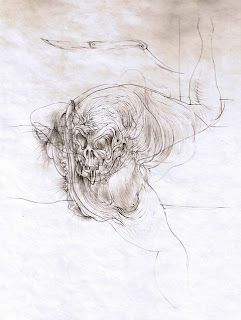 Compagnion of Hans Bellmer, Unica Zürn, born in Berlin in 1916, had with the surrealist artist met in 1959, a stormy relationship marked with various interments in psychiatric clinics. It's from Bellmer's flat that Unica jumped out of the window in 1970. Fragile, Unica Zürn described her childhood as wonderful. This period was nevertheless marked by the divorce of her parents, and the loss of the family home, where his father, writer, used to collect objects brought back from his travels. "Dark Spring is the story of her childhood's impressions pushed up to their tragic consequences. Between a father beloved but distant and a hated mother, the little girl will learn about the adult world, and will discover an horrifying and fascinating sexuality, a crazy love which will lead her to suicide "(biography from Belfond publisher -1971).