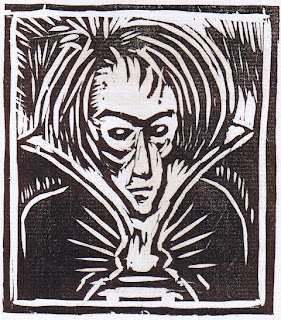 Based in Paris for three years, Antonin Artaud (1896-1948) tries very quickly to get published. He presents his poems to La Nouvelle Revue Française, but his work is turned down by Jacques Rivière. The director of N.R.F. wrote on May 1, 1923 : "I regret not being able to publish your poems in La Nouvelle Revue Française. But I've taken enough interest to want to get to know their author."
Artaud also contacted the gallery Simon, owned by Daniel-Henry Kahnweiler. His poems are selected and a first collection, Tric Trac du Ciel is published the same year, with a colophon (ironically) dated May, 4 - just three days after the rejection letter of Jacques Rivière. Nevertheless, Artaud starts a correspondence with the director of the N.R.F. to clarify his approach. He wrote June 5, 1923:
"I suffer from a terrible disease of the mind. My thought abandons me at every level. From the simple fact of the thought to the external fact of its materialization in words. Words, sentence forms, internal directions of thought, simple reactions of the mind, I'm in the constant pursuit of my intellectual being. When therefore I can grasp a form, however imperfect it may be, I lay down in fear of losing all of it. I am beneath myself, I know, it's a pain, but I'm accepting it in fear of not dying altogether. All of this is badly explained and can introduce a dangerous ambiguity in your opinion on me. Therefore for the sake of the central feeling that dictates my poems and for the strong images or forms that I could find, I still offer these poems to life. "

Jacques Riviere, in September 1924, will publish the letters exchanged with Artaud who masterfully and lucidly expressed the need to literary exist.