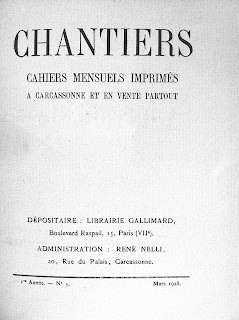 It is in the darkness of his room where he lived as cloistered that Joë Bousquet (1897-1950) launched the magazine Chantiers in 1928. At the initiative to this regional publication, two lifelong friends : the poet of classical expression François-Paul Alibert and the philosopher Claude Estève who taught at the city high school. Others friends from Carcassonne contributed to the magazine, Ferdinand Alquié, Henri Féraud, Maurice Nogué and René Nelli, who was the director ; but also friends from the capital, Paul Eluard, Michel Leiris.

If the filiation with Surrealism marked the initial spirit of the magazine, the influences multiplied in contact with other publications of that time such as Les Cahiers de l'Etoile of Carlo Suares, Le Grand Jeu of Daumal René and Roger Gilbert-Lecomte, and of course Les Cahiers du Sud of  Jean  Ballard and André Gaillard.

In nine issues on almost two years, Chantiers offers a variety of styles, mixing different currents of that time.